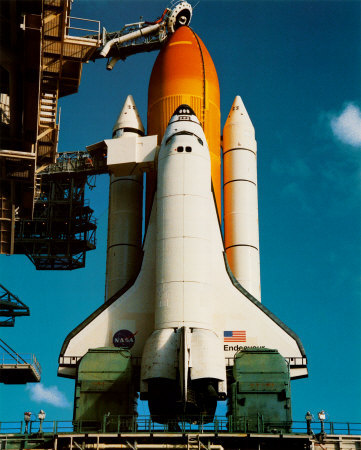 CAPE CANAVERAL — An astronaut launching as his congresswoman wife, continuing an inspiring recovery from a gunshot wound less than four months ago, looks on. A high-priced science instrument that could crack mysteries of the universe, championed by a Nobel Prize-winning physicist. And a presidential audience — plus hundreds of thousands of expected visitors — for the blastoff of the penultimate shuttle mission. It might not trump Britain’s royal wedding, but Endeavour’s 25th and final mission, set for launch at 3:47 p.m. Friday, packs more than the usual drama accompanying a shuttle flight to the International Space Station. “It’s not your run-of-the-mill kind of mission,” said Bill Gerstenmaier, head of NASA’s space operations division.

Endeavour and its crew of six plan to deliver the Alpha Magnetic Spectrometer, a $2 billion instrument more than 16 years in the making that Gerstenmaier said could produce “really Earth-shattering science.” But all eyes during the minimum two-week flight will be on Endeavour commander Mark Kelly. The 47-year-old Navy captain was thrust into the national spotlight when his wife, Arizona congresswoman Gabrielle Giffords, was critically injured during a Jan. 8 shooting rampage in Tucson. Six people were killed and 12 others hurt. Kelly put his training on hold to be by Giffords’ bedside. A month later, as she continued a remarkable recovery from a brain injury and transferred to a Houston rehabilitation center, he chose to press ahead with the shuttle mission.

It helped that he’d flown three previous missions, Kelly said. “Having that experience certainly makes it very manageable to be able to handle what’s going on in my personal life and focusing on the mission,” he said. “I’ve given this mission everything I would have if the events of Jan. 8 did not happen.” Giffords’ doctors cleared her this week to travel to KSC to see Kelly and his crewmates launch. She flew to the Space Coast on Wednesday.Also planning to attend the launch, a year after he delivered a major space policy speech at KSC: President Barack Obama and his family. It would be the first time a sitting president watched a shuttle launch since Bill Clinton saw then-77-year-old John Glenn blast off in 1998.

Fitting, perhaps, for a mission resurrected through political pressure…

This Video is a fitting Tribute To All Who Have Made The Shuttle Program Possible:

This chapter of America’s manned space program is nearly closed. We here at the Kennedy Space Center wanted to say thank you to our larger space family, and to those who supported us along the way. We all did what we could do to accomplish our goals and get our astronauts and orbiters to space and then safely home… Each of us brought something different, but together we found ways to overcome the challenges and build a future together. To a person we feel blessed to have worked on Shuttle… You will see that in the smiling faces within this simple video. It is an indigenous effort – We wrote, played and recorded the song, then put together the video… and are grateful to share it with you.  We did what we could, and in these times of uncertainty, we ask you, wherever you are in the world, to just do what you can do to make your life and your community better… progressing day by day… no one can ask any more than that. That’s all our country asked of us, and we did our best. Thank you America for giving us that opportunity. It was a good ride.

This site uses Akismet to reduce spam. Learn how your comment data is processed.

Have a Question? We're Here To Help!

If you have found the perfect location and want information on custom home floor plans, personalization options, or would simply like to schedule a visit, we're here to help!